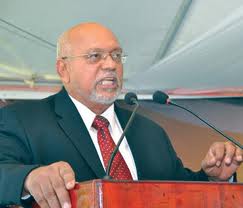 President Donald Ramotar on Sunday said consideration may be given to employing co-ops as a means of turning around the fortunes of the sugar industry if the idea resonates well with stakeholders as he reiterated calls for the resuscitation of the ailing sector.

The president expressed the view at a ceremony to mark the 65th anniversary of the Enmore Martyrs, who were killed on June 16, 1948, during a protest for better working conditions.

On Sunday, persons gathered at the site of the Enmore Martyrs’ ‘Monument, to honour the sacrifices of Lall, Harry, Puran, Surajballi and Lalabaji, who were gunned down as they fought for better wages and living conditions on the estate.

The annual ceremony which featured several cultural items was attended by several ministers, members of the diplomatic corps, trade unionists, relatives of the slain men and scores of residents.

“Many of the top organisations have their beginnings in the sugar industry,