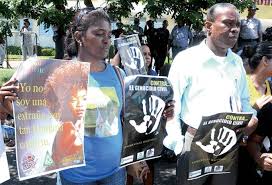 The London-based human rights watchdog, Amnesty International, has joined a chorus of condemnation and calls for the Dominican Republic to retract a Constitutional Court ruling that primarily strips Dominicans of Haitian descent of citizenship.

Amnesty International on Friday urged the Dominican Republic not to implement the court ruling “that could leave hundreds of thousands of Dominicans of foreign descent stateless.”

Under aspects of the ruling, individuals of foreign descent – the vast majority of Dominicans of Haitian origin- could be deprived of their nationality, forced to leave and ordered to apply for citizenship from scratch, Amnesty International said.

“The full implementation of this ruling will have a devastating impact on the lives of hundreds of thousands of people whose identity documents would be cancelled and, therefore, would see many of their human rights – freedom of movement, education, work and access to healthcare – totally denied,” said Chiara Liguori, Amnesty International researcher on the Caribbean.

“The case could have wide-reaching discriminatory effects, particularly for Dominicans of Haitian descent,” Liguori said.

The court also ordered the Central Electoral Board to search all birth registries from 1929 onwards for people who had been supposedly wrongly registered and recognized as Dominican citizens. It said their cases should be treated the same as Deguis’.

Liguori said some parts of the ruling have already started to be implemented.

Deguis has been allowed to stay in the Dominican Republic pending a National Regularization Plan that will decide the fate of those deemed to be residing illegally in the country, Liguori said.

“I want to work, but I can’t,” Deguis told Amnesty International. “I have four kids, but they cannot go to school. We were born here, and we are from here, but we suffer a lot of discrimination.”

If implemented in this way, Amnesty International said the ruling would violate the Dominican Republic’s human rights obligations.

The human rights watchdog also said that the ruling contravenes a 2005 landmark decision of the Inter-American Court for Human Rights and breaks a basic principle of law, explicitly stated in the Dominican Republic Constitution, which prohibits retroactive application of the law.

The Constitutional Court ruling is the last of a number of administrative, legislative and judicial decisions that since the early 2000s have had the effect of retroactively depriving Dominicans of Haitian descent of their Dominican nationality, Amnesty International said.

“This latest move could completely destroy the lives of Dominican citizens of Haitian origin, especially if they are forced to leave the country by the National Regularization Plan,” Liguori said.

“It is totally unfair to say that people who have been living as Dominicans for decades no longer belong in the country or have any rights within it,” he added.

It is unclear how many people are affected by the ruling of the Constitutional Court.

A recent survey conducted by the Dominican Republic National Statistics Office found that 244,151 people were the children of “foreign” parents. Of those, 86 percent were of Haitian origin.

“The Dominican authorities should take all necessary measures to guarantee Juliana Deguis and other Dominicans of foreign descent access to their identity documents in order for them to restore the rights they enjoyed when they were recognized as Dominican citizens”, Liguori said.

According to Amnesty International, Deguis initiated a constitutional review in 2008 after her birth certificate was seized by the Central Electoral Board when she applied for an identity card, on the basis that her name was ”Haitian”.

On September 23, the Dominican Constitutional Court ruled against her, stating that her rights had not been violated by the Central Electoral Board.

According to the ruling, Deguis, who was born in the Dominican Republic in 1984 to Haitian parents, had been wrongfully registered as Dominican at her birth.

Her parents were considered “foreigners in transit” because they could not prove their legal status in the Dominican Republic, Amnesty International said.

Therefore, Deguis should have never had Dominican nationality and must now be stripped of it, according to the court ruling.

Amnesty International said there are at least 40 similar cases awaiting a decision from the Constitutional Court.

However, it is unlikely that the Court will rule on them, as the Court specified in the ruling that the effects of the ruling apply to a wider group of people, Amnesty International said.

It said even though the Dominican Republic State has the sovereign right to decide conditions for granting nationality, “it is bound by human rights law not to arbitrarily deprive anyone of nationality, especially when this could result in statelessness.”

Needless to say, the court ruling has been vehemently condemned throughout the world.

On Thursday, hundreds of Haitian Americans in New York protested the court ruling in a raucous rally, organized by the Brooklyn, New York-based Haitian Diaspora for Civic and Human Rights (HDRHR), in coalition with other civic organizations.

“These people were born in the Dominican Republic, a lot of them don’t speak Creole and don’t know anyone in Haiti,” HDRHR organizer Barbara Saint-Louis told the rally. “We’re asking for justice.”

Vilaile Charlotte, a Haitian-Dominican living in New York, who has six children living in Santo Domingo, the Dominican Republic capital, said: “It’s not a political situation, it’s a humanitarian situation.”

Edward Paulino, assistant professor of history at John Jay College of Criminal Justice in Manhattan, who is Dominican-American, said the court’s ruling underscores a history of racial prejudice in the Dominican Republic against Haitians and their descendants.

“Dominicans are having to thread that needle: how to love something but also calling attention to its weaknesses,” he said.

“Anything that’s seen as a criticism is seen as treasonous,” he added. “We’re not the first people who have had to grapple with that.”

Analysts say the ruling is expected to primarily affect descendants of Haitian laborers who entered the Dominican Republic to work in the sugar industry.

The ruling has inflamed the historically tense relationship between the two countries that share the island of Hispaniola.

In the wake of the ruling, the Haitian government recalled its ambassador to Santo Domingo.

The Caribbean Community (CARICOM) and some of its leaders, including St Vincent and the Grenadines’ Prime Minister Dr Ralph Gonsalves, has also condemned the ruling.

Gonsalves, in a letter to his Dominican Republic counterpart, Danilo Medina, expressed “personal outrage” over the court’s ruling.

“I regret that the circumstances have compelled me to write robustly on this matter,” Gonsalves said. “I assure you that my language is restrained and does not fully express my personal outrage.

“This court decision, in effect, renders stateless, huge numbers of these persons of Haitian descent,” he added. “Surely, this ruling by the Court is unacceptable in any civilized community.”

Gonsalves further told Medina that the court’s ruling is “an affront to all established international norms and elemental humanity.

“It is subversive of your country’s international human rights obligations as enshrined in several international and hemispheric conventions/treaties to which it is a state party,” he said.

“No one can be hood-winked as to the reason and the purpose for this kind of discriminatory legislation,” Patterson told the Caribbean Media Corporation (CMC).

“Within the region we have an obligation to speak, and we cannot allow such inequities to go without our strongest condemnations,” he added.

Patterson was a major player in efforts to integrate Haiti into the regional integration movement.

On Friday, the CARICOM Secretariat in Georgetown, Guyana, issued a statement saying it was “deeply concerned” by the court ruling.

CARICOM said it noted “with regret” that the decision goes against pronouncements of the Inter-American Commission on Human Rights (ICHR).

The ICHR has repeatedly called on the Dominican Republic to adopt measures to guarantee the right to nationality in the country and to adapt its immigration laws and practices in accordance with the provisions of the American Convention on Human Rights.

“The Caribbean Community is particularly concerned about the humanitarian implications of the judgment,” the statement said.

“The implications of tens of thousands of persons being plunged into a constitutional, legal and administrative vacuum by the ruling are a source of deep distress to those affected and one of significant disquiet for our Community,” it added.

CARICOM, called on the Dominican Republic to “adopt measures to protect the human rights and interests of those made vulnerable by this ruling and its grievous effects.”

It is estimated that some 210,000 Dominican-born people of Haitian descent who were legally considered Dominican and contributed, as citizens of the Dominican Republic, to the growth and development of their society, economy and politics, would be affected, rendering them stateless in violation of international human rights obligations.

The Geneva-based office of the United Nations High Commissioner for Human Rights has also called on authorities in the Dominican Republic to ensure that the ruling did not leave persons of Haitian descent in “constitutional limbo”.

A United Nations-supported study, released this year, estimated that, in addition to about 210,000 Dominican-born people of Haitian descent living in the Dominica Republic, there are another 34,000 born to parents of other nationalities.