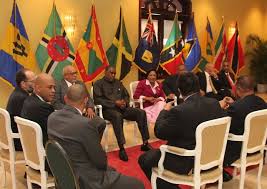 Caribbean Community (CARICOM) leaders say they have had a “very successful” two day inter-sessional summit here, completing a 20-odd agenda and implementing policies and strategies that would ensure the future socio-economic and political development of the region.

St. Vincent and the Grenadines Prime Minister Dr. Ralph Gonsalves, who is also the CARICOM chairman, told reporters late Tuesday night that the summit had dealt with a number of matters regarding the further development of the 15-member regional integration grouping, ranging from information communications and technology (ICT) to a future trade agreement with Canada.

“We had a very successful conference we had 20 odd items on the agenda and we completed the agenda,” he told reporters adding that high on the agenda was the ICT sector which regional leaders agreed “should take place in tandem with the reform process of the region for the years 2014-19”.

The meeting received a presentation by Grenada’s Prime Minister Dr. Keith Mitchell, who has lead responsibility for ICT within the quasi CARICOM cabinet and Gonsalves said it was agreed that there should be a sustained effort over the next two years for building a single ICT space in the region.

He said a road map would be presented to the leaders when they meet for their regular summit in Antigua and Barbuda.

Gonsalves said the ICT development was also coming at a time when the region is developing its human resource potential and welcomed also a presentation by St. Kitts-Nevis Prime Minister Dr. Denzil Douglas, who is celebrating his 25 year as a legislator in this country.

Heads of Government of the Caribbean Community (CARICOM), at their Inter-Sessional Conference in St. Vincent & the Grenadines on Monday, adopted a ten-point reparations plan, formally dubbed a “Reparatory Justice Framework.”

Dr. Ralph Gonsalves, host prime minister, disclosed afterwards that, arising from the adoption of the ten-point plan, CARICOM leaders will be pushing to hold talks with Europe in June on the issue of reparation for slavery and native genocide.

It is understood that one proposed venue for the conference is Lancaster House  in London, scene of many of the discussions and decisions on de-colonialisation within the British Commonwealth, including deliberations leading to Jamaica’s Independence in 1962.

According to a CMC report, Dr. Gonsalves said the regional leaders were expected to continue discussing the issue on Tuesday, with the main focus being on a budget for the regional commission.

In response to the news coming out of CARICOM, Prof Verene Shepherd, Chair of Jamaica’s National Commission on Reparation, told RJR News that she welcomed this move by CARICOM and indicated that she was “looking forward to the conclusion of the Inters-sessional meeting and… finalization of the next steps to be taken as Heads seek to open dialogue with Europeans on this important matter of reparation for Caribbean Slavery and native genocide.”

“The healing process for victims and the descendants of the enslaved and enslavers requires as a precondition the offer of a sincere formal apology by the governments of Europe. Some governments in refusing to offer an apology have issued in place Statements of Regrets. Such statements do not acknowledge that crimes have been committed and represent a refusal to take responsibility for such crimes. Statements of regrets represent, furthermore, a reprehensible response to the call for apology in that they suggest that victims and their descendants are not worthy of an apology. Only an explicit formal apology will suffice within the context of the CRJP.”

“Over 10 million Africans were stolen from their homes and forcefully transported to the Caribbean as the enslaved chattel and property of Europeans. The transatlantic slave trade is the largest forced migration in human history and has no parallel in terms of man’s inhumanity to man. This trade in enchained bodies was a highly successful commercial business for the nations of Europe. The lives of millions of men, women and children were destroyed in search of profit. The descendants of these stolen people have a legal right to return to their homeland.  A Repatriation program must be established and all available channels of international law and diplomacy used to resettle those persons who wish to return. A resettlement program should address such matters as citizenship and deploy available best practices in respect of community re-integration.”

“The governments of Europe committed genocide upon the native Caribbean population. Military commanders were given official instructions by their governments to eliminate these communities and to remove those who survive pogroms from the region. Genocide and land appropriation went hand in hand. A community of over 3,000,000 in 1700 has been reduced to less than 30,000 in 2000. Survivors remain traumatized, landless, and are the most marginalized social group within the region. The University of the West Indies offers an Indigenous Peoples Scholarship in a desperate effort at rehabilitation. It is woefully insufficient. A Development Plan is required to rehabilitate this community.”

“European nations have invested in the development of community institutions such as museums and research centers in order to prepare their citizens for an understanding of these CAH. These facilities serve to reinforce within the consciousness of their citizens an understanding of their role in history as rulers and change agents. There are no such institutions in the Caribbean where the CAH were committed. Caribbean school teachers and researchers do not have the same opportunity. Descendants of these CAH continue to suffer the disdain of having no relevant institutional systems through which their experience can be scientifically told. This crisis must be remedies within the CJRP.”

“The African descended population in the Caribbean has the highest incidence in the world of chronic diseases in the forms of hypertension and type two diabetes. This pandemic is the direct result of the nutritional experience, physical and emotional brutality, and overall stress profiles associated with slavery, genocide, and apartheid. Over 10 million Africans were imported into the Caribbean during the 400 years of slavery. At the end of slavery in the late 19th century less than 2 million remained. The chronic health condition of Caribbean blacks now constitutes the greatest financial risk to sustainability in the region. Arresting this pandemic requires the injection of science, technology, and capital beyond the capacity of the region. Europe has a responsibility to participate in the alleviation of this heath disaster. The CRJP addresses this issue and calls upon the governments of Europe to take responsibility for this tragic human legacy of slavery and colonization.”

“At the end of the European colonial period in most parts of the Caribbean, the British in particular left the black and indigenous communities in a general state of illiteracy. Some 70 percent of blacks in British colonies were functionally illiterate in the 1960s when nation states began to appear.  Jamaica, the largest such community, was home to the largest number of such citizens. Widespread illiteracy has subverted the development efforts of these nation states and represents a drag upon social and economic advancement. Caribbean governments allocate more than 70 percent of public expenditure to health and education in an effort to uproot the legacies of slavery and colonization. European governments have a responsibility to participate in this effort within the context of the CRJP.”

“The forced separation of Africans from their homeland has resulted in cultural and social alienation from identity and existential belonging. Denied the right in law to life, and divorced by space from the source of historic self, Africans have craved the right to return and knowledge of the route to roots. A program of action is required to build ‘bridges of belonging’. Such projects as school exchanges and culture tours, community artistic and performance programs, entrepreneurial and religious engagements, as well as political interaction, are required in order to neutralize the void created by slave voyages. Such actions will serve to build knowledge networks that are necessary for community rehabilitation.”

“For over 400 years Africans and their descendants were classified in law as non-human, chattel, property, and real estate. They were denied recognition as members of the human family by laws derived from the parliaments and palaces of Europe and subjected to the ideology of racism that denigrated all things African. This history has inflicted massive psychological trauma upon African descendant populations. This much is evident daily in the Caribbean. Only a reparatory justice approach to truth and educational exposure can begin the process of healing and repair. Such an engagement will call into being, for example, the need for greater Caribbean integration designed to enable the coming together of the fragmented community.”

“For 400 years the trade and production policies of Europe could be summed up in the British slogan: ‘not a nail is to be made in the colonies’. The Caribbean was denied participation in Europe’s industrialization process, and was confined to the role of producer and exporter of raw materials. This system was designed to extract maximum value from the region and to enable maximum wealth accumulation in Europe. The effectiveness of this policy meant that the Caribbean entered its nation building phase as a technologically and scientifically ill-equipped- backward space within the postmodern world economy. Generations of Caribbean youth, as a consequence, have been denied membership and access to the science and technology culture that is the world’s youth patrimony.  Technology transfer and science sharing for development must be a part of the CRJP.

“Caribbean governments that emerged from slavery and colonialism have inherited the massive crisis of community poverty and institutional unpreparedness for development. These governments still daily engage in the business of cleaning up the colonial mess in order to prepare for development. The pressure of development has driven governments to carry the burden of public employment and social policies designed to confront colonial legacies. This process has resulted in states accumulating unsustainable levels of public debt that now constitute their fiscal entrapment. This debt cycle properly belongs to the imperial governments who have made no sustained attempt to deal with debilitating colonial legacies. Support for the payment of domestic debt and cancellation of international debt are necessary reparatory actions.”