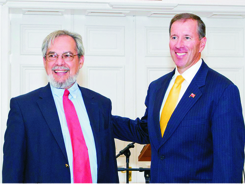 The resignation of Mark Pettingill as Attorney General had nothing to do with JetGate; instead it was because he wanted to pursue another opportunity in the private sector.

This came from Premier Michael Dunkley at Government House as Trevor Moniz was sworn in as the new Attorney General during a short ceremony, which garnered only a handful of attendees, which included MP Cole Simons and Cabinet Secretary Dr. Derrick Binns.

During last Fridays Motion to Adjourn in the House of Assembly, Opposition Leader Marc Bean suggested that Mr. Pettingill was set to become the senior legal advisor for Clarien Bank, a claim that was neither refuted or substantiated.

In a brief address to the media, Mr. Dunkley said he reluctantly accepted Mr. Pettingill’s resignation this morning as he had “trumpeted some important legislation” during his tenure and added: “He has put us in a good position going forward. I am excited to welcome Trevor Moniz. He has a tremendous task ahead of him.”

Mr. Dunkley concluded by saying that Mr. Moniz would be the Acting Minister of Health until Senator Jeanne Atheden is sworn in on Tuesday.

Trevor Moniz has been sworn in as the new Attorney General today.
The appointment comes in the wake of former AG Mark Pettingill handing his resignation this morning to Premier Michael Dunkley, saying he wants to pursue an opportunity in private sector. Mr Pettingill will remain a backbencher.

Jeanne Atherdon will be sworn in as the new Health Minister on Tuesday.

A new Deputy Premier was not announced.