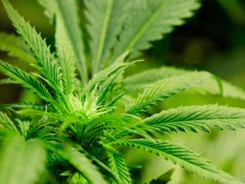 A government appointed task force is recommending the decriminalization of marijuana in this Overseas British Territory and that the government should take “immediate action to enable access to medical cannabis with a prescription”.

The Cannabis Reform Collaborative (CRC) in its 137-page report notes that the current drug policy is wasting money and resources and harming people’s lives since careers options become limited once a criminal record is established. It said cannabis prohibition is not working.

National Security Minister Michael Dunkley tabled the report in the Parliament last Friday and among the recommendations are the introduction of a less punitive warning system, an end to racial profiling in the legal system, increasing the legal age for alcohol consumption to 21, and increased spending on cannabis education and prevention.

“Where it is found that reform is in fact warranted, changes will only be made in a measured fashion with careful consideration of the Bermudian context,” Dunkley told legislators.

Caribbean countries have been discussing the idea of decriminalizing marijuana for medicinal purposes and a report on the issue is be tabled at the July summit of regional leaders in Antigua.

The report notes that a “phased approach to cannabis reform offers the benefits of assessing, establishing and implementing long-term plans that focuses on more efficient prevention initiatives, effective treatment programmes that are supported by the Ministry of Health and sensible, society-guided regulations that our community understands.

“Medical access should be a top priority in this phased approach. Specifically, a significant and growing body of research continues to highlight and expand the medical potential of cannabis, but its illegal status deprives access to individuals with often life-threatening diseases or chronic ailments, and the dignity and right to have autonomy over their own bodies, and the ability to choose for themselves alternative forms of treatment.”

It said that decriminalization should be prioritised to address the negative social and economic implications of incarcerating cannabis-related activity, and to enable a shift in government expenditure from enforcement to education and prevention.”

The report notes that the primary advantage of decriminalisation would be that “a sizeable portion of society will no longer be criminalized.

It also advises that funds spent on enforcing current laws could be diverted to education and prevention programmes.

“With an increase of prevention initiatives — school-wide curriculum around substance use and an education programme for the wider community — Bermuda will continue to see a decrease in substance use and abuse,” the report states.

“The public and future of Bermuda need to be provided with a balanced approach to understand any positive or negative consequences related to substance use and abuse while working towards a healthier community.”

The report acknowledged that decriminalisation would fail to address “issues associated with the illegal supply chain” such as the black market and gang violence” but it said that these issues could be controlled if full legalisation was eventually introduced.

The CRC said its own survey suggests that full legalisation is supported by more than half of the population and recommended that this option “should be seriously considered as the final step in this phased approach to enable regulation of the market and avoid unintended consequences resulting from other reform approaches, as witnessed in other jurisdictions”.

“Policy reform should consider short medium and long term potential in the context of a sustainable model,” the report states, adding “the potential exists for a truly local market in terms of supply and demand, which could potentially oust the black market through an economically sustainable framework.”

The report also notes that such a “drastic shift” in policy would not only reduce costs of enforcement and incarceration, it would also end “the oppositional relationship between cannabis users and law enforcement, making it easier for police to cooperate with otherwise law-abiding cannabis users”.

“Creating a legal market also ends the black market for cannabis, estimated to be worth between $20 million and $100 million a year.

“Such a shift thereby ends clandestine funding for the underground economy and instead creates a legal market for cannabis. Such a market has the potential to generate tax revenue for the Government as well as preventing capital from leaving the Island through purchase for the illicit trade.”