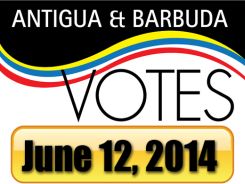 The announcement came at his party’s a rally, attended in Potters Village by about 4,000 people, according to police estimates.

While announcing the date, Spencer described the decision as a “crucial” one for voters, telling supporters “you are doing this for your country.”

In immediate response, the man who wants to be prime minister, Gaston Browne, described the announcement as “long overdue” crediting pressure from the opposition as the reason for the night’s announcement.

The writ of election will be issued on May 16, and candidate nomination five days later on May 21.

These announcements have during Antigua and Barbuda’s longest campaign season in recent memory and after a mid-March meeting when thousands went away disappointed that the election date wasn’t announced.