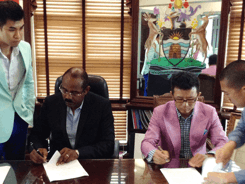 One day after taking up the position of Prime Minister, Gaston Browne has signed a Memorandum of Agreement (MOA) with Yida International Investment Antigua Ltd to pave the way for a two-billion dollar investment project in this twin-island-state.

According to a government press statement, the MOA emerged after an eight-hour session of negotiations on Saturday, June 14.

Yida International is expected to invest over 200 million dollars annually in the economy over the next 10 years, as well as provide an Antigua & Barbuda presence in the People’s Republic of China to attract additional economically viable investments.

PM Browne stated, “I promised the people that my administration would bring the type of investments to the country that will transform Antigua & Barbuda into an economic powerhouse and I am serious about that promise.

“This Memorandum of Agreement is the result of our determination to work in the interest of the people of the country,” he added.

Yida investors say the initiative will see the transformation of Guiana Island and surrounding lands via the construction of five five-star hotels.

Attorney General and Minister of Justice and Legal Affairs, Immigration and Labour, Steadroy Benjamin, who witnessed the MOA, said the new Antigua & Barbuda Labour Party (ABLP) is about delivering for the people of Antigua & Barbuda.

Benjamin pointed out, “We were elected convincingly by the majority of the people of the country and we are committed to live up to our promises. One major promise is to provide jobs. This project will ensure that we move people from unemployed to being employed.”

During the lead up to the 2014 election, Prime Minister Browne vowed that his administration, when elected, would bring tangible investments that will generate much needed economic growth for the country.

The Antigua-Barbuda Labour Party gained a landslide victory early yesterday morning (Jun. 13), snagging 14 of the 17 seats in that twin-island Federation.

With his wife by his side, the 47-year-old Prime Minister-elect told the local media that whatever promises were made during the months-long campaign, his Labour Party Government would deliver.

He went on to thank all who have contributed to the victory of his party, adding that he was grateful for the overwhelming support given.

“It is evident that the people have spoken and they have spoken resoundingly. We are very humble by the mandate you have given us, we understand the enormity of the job to fix this country and to put our people back to work.

“And as much as we are celebrating a victory this morning, the truth is, the work has just begun. The reality is, this country is in dire strains and it will require the collective efforts of all, not only candidates of the Antigua and Barbuda Labour Party and other members, but certainly the entire population,” he told the Antigua press.

He accepted the pledge of the former Prime Minister, Baldwin Spencer, to work along with the new government to “heal this country”. Spencer had contacted Browne around 11 the night before and conceded but also lend his support to move the country forward.

“It is important that we, as a matter of priority, can join our efforts to move this country forward. For us to embark on a healing process and to make sure that we move forward as a strong nation, a united nation to achieve our ultimate objective of transforming Antigua and Barbuda into an economic powerhouse, one in which we would be able to improve the living standards of all the people,” he noted.

The Prime Minister-elect thanked his wife and family members, including his mentally ill mother, stating that “my only disappointment in life is the fact that she is not in a position to enjoy the fruits of my labour”.

Browne claimed that the victory was not for the candidates but the people of Antigua and Barbuda.

“We will honour your support, we will never betray your trust,” he promised.