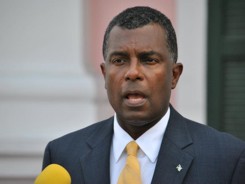 The government of The Bahamas is still awaiting an official response from the United States over the allegations that its National Security Agency (NSA) is recording and archiving every cell phone conversation in The Bahamas, Minister of Foreign Affairs and Immigration said yesterday.

Mitchell had said that the government was expected to receive a report from the U.S. Department of State last week addressing the claim.

However, he said yesterday that there is no new information.

“The generic response is that they are waiting for their other agencies to report in or something of that nature,” he said when contacted for comment.

The allegations were first reported on May 19 and were based on documents leaked by former NSA analyst Edward Snowden.

The story was originally reported by U.S. website The Intercept.

According to the documents, the NSA is using a program called SOMALGET to store and collect full take audio of cell phone calls in The Bahamas and one other country, revealed to be Afghanistan by WikiLeaks founder Julian Assange.

In the past several weeks, Mitchell has raised the matter with CARICOM and the Organization of American States.

He said yesterday the United States continues to give “generic answers” and said the public will continue to be informed as “we get the generic answers from them, whatever answers they give”.

“There is a new chargé (d’affaires) coming into The Bahamas in a couple of days, so we will tackle the question afresh if it is not resolved,” he said.

“We’re not alone in this; you have the Germans, the Brazilians, everybody is in the same thing, and I believe the Americans themselves are trying to figure out how to actually deal with it. That’s my impression.”

According to the NSA documents, the agency reported most on The Bahamas during the four-month period leading up to the May 7, 2012 general election when compared to other reporting periods.

The leaked documents state that The Bahamas is a “test bed for system deployments, capabilities and improvements”.