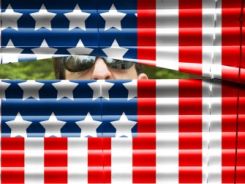 Bahamas to take US spying claims to OAS

A foreign service team will travel to Paraguay this week to address the Organization of American States (OAS) and meet with a representative from the office of the US assistant secretary of state on the controversial allegations that the National Security Agency (NSA) of the United States is recording and storing audio from every cell phone conversation in The Bahamas, Minister of Foreign Affairs Fred Mitchell said on Sunday.

During a press conference, Mitchell pointed out that it has been more than a week since US officials indicated they would give a public response on the matter.

No such response has yet come, according to Mitchell.

Mitchell said his ministry is “kicking it up to an even higher level to get answers”.

He said it is imperative to get to the bottom of who, if anyone, authorized the alleged spying.

Only the ministry of national security, the Office of the Attorney General and the commissioner of police can authorize listening of private citizens’ phone conversations, according to the Listening Devices Act.

Mitchell said that everyone in the current and former administration, who would have had authority to sign off on access to the cell phones with the “glaring exception” of the former prime minister, Hubert Ingraham, has publically denied knowledge of the matter.

Asked whether he felt Ingraham should provide a public response, Mitchell said, “I am not going to prescribe to him what his behavior ought to be.

“I only point out to you that everybody has spoken except him and that is as far as I want to go.”

He added, “The fact is, the allegations are still out there and as the government of the day we have to get to the bottom of this and if there is unlawful activity we have to make every effort to stop it.”

Mitchell said whatever the outcome of the matter is, the government will stand up for the rule of law, for the protection of the privacy of Bahamians, and will hold all The Bahamas’ international partners to their own moral standards.

When asked if there is any evidence to suggest the Bahamas Telecommunications Company (BTC) was used to facilitate the recordings, Mitchell said there are many “straws in the wind at the moment, but no hard facts”.

The company has said neither BTC nor its parent company Cable and Wireless Communications (CWC) is “complicit” in any breach of customer information.

Mitchell said he has assigned an officer to gather information on the history of the matter.

“Social media is alive with this, which means the Bahamian population is agitated over it,” he said.

“I saw a very strong editorial by The Nassau Guardian, which described it as an act of hostility.

“Even The Tribune, which is not normally on the side of these things, indicated that we need to get to the bottom of who authorized, if it is true, people to violate the privacy of Bahamians.

“Across the board this is a matter of concern so the government cannot remain silent in the face of it.

“It seems to me that the logical conclusion to it is, once you find out that the law has been violated, then you have to ask people to stop and what follows from that.”

The NSA reported most on The Bahamas during the four-month period leading up to the May 7, 2012, general election when compared to other reporting periods outlined in confidential documents leaked by former NSA analyst Edward Snowden.

Those documents do not reflect any reporting from The Bahamas prior to January 2012, but it is unclear whether this means the program did not operate in this country ahead of that period.

As has been widely reported, the documents state that the NSA is recording and archiving every cell phone conversation in The Bahamas for up to 30 days.

Mitchell said he will provide an update on the matter during his contribution to the budget debate sometime next week.