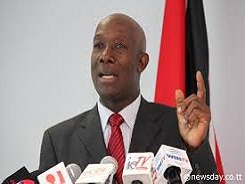 The Government’s proposal for run-off polls has the potential to create dangerous political instability, says Opposition Leader Dr Keith Rowley. Yesterday, he urged the population to voice its rejection of the idea, saying the proposal could assist a defeated government or MPs to remain in office until a run-off poll was held. Speaking at a briefing at Balisier House, Port-of-Spain, yesterday after Wednesday’s People’s National Movement’s General Council meeting on the issue, Rowley said:

“This offers the opportunity of a defeated party to hold on to power while this secondary election is done. It’s a major threat to T&T’s peace, stability and good order. “There’s the potential for the first time not to have a smooth handover of Government. It’s a Trojan horse with the potential to bring down the empire of stability in T&T. We have rejected it and we will resist it.” Rowley urged the population to react, noting the People’s Partnership Government “only reacted to massive public rejection.”

He said: “It’s now for the people to envisage the day when the Government tries that. We are asking the public to stave off the instability and reject the legislation… to be aware of the situation and express their views to the Government. “It’s only when the people react en masse the Government backs away from what it’s doing. We have hours to Monday’s debate to stave this off.

“It’s for the population to express their position and to stand up and say they will not accept this. If the population remains quiet and allows Government to pass this, the detriment I described will befall us.” The PNM’s council on Wednesday passed a resolution authorising the leadership to “do all things lawful, democratic and right in defence of T&T’s democracy and call on the right-thinking people of T&T to reject the measures in the bill,”

Rowley also reiterated that Parliament’s new Standing Orders ordered a fixed recess between July and September and the Parliament could only meet in the period between in an emergency but Government had not said what the emergency was for Monday’s sitting. Out of the three constitutional amendments which Government proposes, Rowley said the recommendation for a two-term limit for prime ministers was a non-issue and was not needed as a matter of urgency.

He said the recall of MPs would create a disruption since it was proposed for the fourth year of a term, when a government should be delivering, and required two thirds of people on a voters’ list to appeal for the recall. So that proposal had little chance of success and there was no urgency for it, either, he added. But the run-off poll, which will be triggered when a candidate fails to get 50 per cent of the votes cast, was the real “poison” and the reason Government was having the sitting, Rowley said.