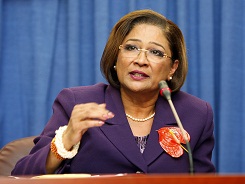 The coalition People’s Partnership government, gearing up for a general election by mid-2015, has introduced legislation providing for 10-year term limit for the head of government as well as allowing voters to recall their elected representatives.

In addition, Prime Minister Kamla Persad Bissessar told Parliament Monday that the Constitution Amendment Bill will also make provisions for a run-off in a general election, where the leading candidate fails to secure more than 50 per cent of the votes on the first count.

In the first ministerial statement under the new Standing Orders of the House of Representatives, the Prime Minister said the measures were “a bold step” which would, “breathe new life and meaning into the democratic process” and give more power to people.

“These initiatives are initiatives we promised in our manifesto in 2010,” Persad-Bissessar said. “We are keeping those promises to place power, and greater power, in the hands of the people.”

During the sitting at the International Waterfront Centre, the Prime Minister tabled the bill containing the new measures, the Constitution (Amendment) Bill 2014. The Prime Minister said the legislation required a simple majority, though some of the provisions seek to amend the Constitution. The Government Whip, Dr Roodal Moonilal, said debate on the bill will begin next Monday.

Opposition Leader Dr Keith Rowley did not immediately rule out support for the measures. He indicated the proposals would be reviewed by the PNM caucus. The proposals tabled by the Prime Minister included:

1) Term limits for prime ministers. The limit will be reached once a prime minister has served for a period of ten years and six months (five years being the normal five-year life of a Parliament and the subsequent 90-day period by which general elections must be held). Whether the terms served were concurrent or broken will be irrelevant, under details of the bill, meaning persons such as former Prime Minister Patrick Manning would be ineligible to run;

2) A right of recall of MPs. The Speaker of the House of Representatives would be empowered to declare a seat vacant once two-thirds of the population of a constituency sign a petition certified by the Elections and Boundaries Commission (EBC). Two persons in the constituency would be able to request a petition, but only in the fourth year of the MP’s tenure. The petition would only move forward if ten percent of the constituents back it. Then, the EBC will hold a 21-day ballot during which time constituents will be able to vote for or against the petition.

Each person voting would have to sign a statutory declaration that they are entitled to vote in that constituency; and

3) A new threshold for the election of MPs. Only persons who obtain more than 50 per cent of the votes in a seat will be elected MP. If no candidate obtains this, a “supplementary poll” will be triggered between the top two candidates within 15 days. The appointment of a prime minister and the convening of Parliament will be on hold pending all supplementary polls.

The Prime Minister said term limits for prime ministers would be implemented by way of a simple amendment focusing on holding the hand of the President, who is, generally, advised by the Cabinet.

“In our present proposals there is a simple amendment which prevents the President from offering the prime ministership to anyone who has served for two full terms,” Persad-Bissessar said. “The two term limit provision is a very important feature to give power to the people and for a powerful democracy.” The Prime Minister said the proposal was aimed at removing the problem of “fossilised” leadership.

“We have had our fair share of leaders who continued to rule and refused to give way even though it was obvious that the time for change had come. This can suffocate new talent and stifle a democracy,” Persad-Bissessar said. She said 91 countries worldwide have term limits of two terms for their heads of government.

“We are seeking to become country number 92 with term limits for the Prime Minister,” she said.

On the right of recall of MPs, the Prime Minister said the Constitution currently offers a narrow right of recall to leaders of political parties who be trigger Section 49A of the Constitution if an MP is expelled from or resigns from a political party. She said the new measure would expand this right placing, “the power in the hands of the people”.

Of the new 50 per cent threshold, the Prime Minister said this would balance minority interests with majority.

“The voices of the minority would be respected even as effect is given to the will of the majority,” Persad-Bissessar said.

“Every single vote would matter and count as the possibility of voting a second time will breathe new life and meaning into the democratic process. This measure reaffirms democracy and ensures that the balance of power is always tipped in favour of the people, not the government. Over the years, we have seen so many candidates get elected to this House on the basis of winning less than 50 per cent of the votes cast.”

In Parliament, the Opposition did not invoke new Standing Order 24 which allows one MP to ask a brief question seeking elucidation on statements made by ministers.

“I will in the near future, lay a bill to fix the dates of Parliaments so the dates for general elections will be known,” the Prime Minister said. “Such a bill will require a special majority.”

The bill is the third of the People’s Partnership proposing constitutional reform. The first such bill, proposing a resumption of hanging, was voted down by the Opposition. A second bill, on reforming the Tobago-Trinidad relationship, lapsed.

The Association of Southeast Asian Nations, or ASEAN, was established on 8 August 1967 in Bangkok, Thailand, with the signing of the ASEAN Declaration (Bangkok Declaration) by the Founding Fathers of ASEAN, namely Indonesia, Malaysia, Philippines, Singapore and Thailand.

On 8 August 1967, five leaders – the Foreign Ministers of Indonesia, Malaysia, the Philippines, Singapore and Thailand – sat down together in the main hall of the Department of Foreign Affairs building in Bangkok, Thailand and signed a document. By virtue of that document, the Association of Southeast Asian Nations (ASEAN) was born. The five Foreign Ministers who signed it – Adam Malik of Indonesia, Narciso R. Ramos of the Philippines, Tun Abdul Razak of Malaysia, S. Rajaratnam of Singapore, and Thanat Khoman of Thailand – would subsequently be hailed as the Founding Fathers of probably the most successful inter-governmental organization in the developing world today. And the document that they signed would be known as the ASEAN Declaration.