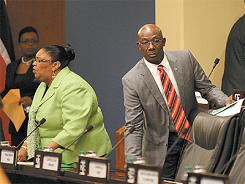 All hands on deck

The Opposition People’s National Movement (PNM) went into emergency response mode yesterday, calling all MPs, legal advisers and officers to a series of meetings today to formulate its position on the Government’s constitutional reform legislation, which will be debated in six days.

PNM PRO Faris Al-Rawi confirmed the Opposition would hold a series of meetings from 10 am until tonight to prepare for Monday’s debate of the bills — one of which involves the run-off ballot system which the PNM itself had introduced for its own internal poll in May. “The debate is in six days, so it’s all hands on deck to examine the issues and prepare. We are not panicking. It’s all part of good organisation,” Al-Rawi added.

At issue particularly is Government’s proposal for a run-off poll in elections, so that each member of the House of Representatives will only become an MP if he or she obtains more than 50 per cent of the votes cast in a constituency. The Prime Minister, who announced the measure on Monday, also announced proposals for a two-term limit for prime ministers and right of recall for non-performing MPs. These require a simple majority vote for passage, she said. Debate begins on Monday morning in Parliament.

While Government’s full complement of MPs was present at Monday’s opening of the parliamentary session, half the 13 Opposition MPs were absent. The PNM, which had expected a recess, later accused Government of breaching Parliament’s new Standing Orders in convening sittings next week during the expected “vacation” period. Yesterday, Al-Rawi said PNM leader Keith Rowley called today’s meeting with MPs to get the party’s position going.

The party hierarchy is also meeting with legal advisers and the central executive will caucus at 5 pm. This will be followed by a meeting of the general council later in the evening. The PNM’s central executive runs the party and makes decisions, some of which have to be ratified by the council, which is the PNM’s highest decision-making body outside of a party convention and involves representatives of all constituencies.

Al-Rawi said the PNM would support measures which the party felt were worthwhile if there was a case for support “but what must happen is consultation and six days is not enough time to consider reflections and questions. “The party must have consultation but there seems to be an undue haste by the Government to push this legislation down the throats of the public,” he added.

Al-Rawi said absent PNM MPs on Monday included Joanne Thomas, who was admitted to hospital that day; Donna Cox, who was unwell; Amery Browne, who was unable to make it; Patricia McIntosh, overseas; and Colm Imbert, on a European vacation. He said Rowley was scheduled to travel to a New York meeting on August 11 and PNM whip Marlene McDonald was due to travel this week. Al-Rawi said he was also scheduled to go abroad this week.

“Many of our members were scheduled to travel in the recess period so that’s why we are having an emergency meeting to confirm who will be required to be here for the debate, the logistics of getting them back in T&T and other arrangements. “Imbert, for instance, is in Europe and will be unable to return until the night time of (Monday’s) debate, so we have a few days to get them back home,” he added.

PNM San Fernando East MP Patrick Manning, one of the PNM MPs who attended Parliament on Monday, will not speak in the upcoming debate. Nor is he attending today’s meeting, since he has therapy, a spokesman said.

Party wants more voices
Al-Rawi said the majority of the country’s senior counsel were all proceeding on vacation as the courts closed on July 31. “Among them are the voices in the public domain who would be serious legal experts on constitutional reform issues and they may be going on vacation. “Therefore, these bills would not receive fulsome attention concerning the constitutional ramifications in the short period we have left in which to deliberate. It’s certainly unlikely,” he added.

Al-Rawi said attorneys assisting the PNM, including Stuart Young and Michael Quamina, are also due to travel. But, he said, the party would also be involving the expertise of former AGs Bridgette Annisette-George and Glenda Morean, attorney Barendra Sinanan, Dr Lenny Saith, Martin Joseph and others.

He commented: “This political manoeuvre by the Government in August is, to me, reminiscent of their implementation of the early proclamation of Section 34, which was also done in the month of August, before Independence celebrations, when no one was paying attention.” Saying the legislation was an “ambush” by Government, Al-Rawi added: “But we’ll be prepared, with all of today’s meetings in the party, to prosecute the people’s business despite the ambush.”

The PNM also had its own constitution review committee, he said. Al Rawi added that the PNM’s run-off system was not the same as what Government was proposing. PNM chairman Franklin Khan said the PNM used the run-off system in its May poll but only to elect a leader and the system was designed for electing leaders such as in Latin America.

Al-Rawi said there were questions on Government’s proposals and the PNM didn’t trust the Prime Minister’s explanation on the background. He added: “You’re not comparing apples with apples (because) we had a closed system. The run-off is used in other democracies. The question is if it can be applied to T&T’s electoral system.

“There are ramifications to be considered, including the fact that this is designed to kill third parties — like the COP and ILP — and it would entrench the two-party system. So this isn’t the same as our run-off plan. “Also, consultations by the Constitution Commission, headed by Prakash Ramadhar, didn’t involve any consultation on this aspect, so Government must explain the unholy rush to deal with this.

“We feel the rush to debate this on Monday and bring it back in the Senate the following week is to ensure that the people who have constitutional understanding don’t get an opportunity to speak out against it but we in the PNM must get the widest possible party views.”
Attorney General Anand Ramlogan said the Government was prepared for Monday’s debate.