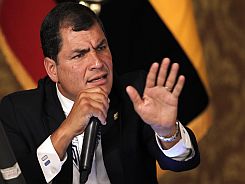 Ecuador’s President Rafael Correa speaks during a meeting with the foreign press corps at government palace in Quito, Ecuador, Wednesday, Feb. 20, 2013. Correa talked about Sunday’s election results in which he secured a landslide second re-election and also announced that he plans to visit the ailing Venezuelan President Hugo Chavez. (AP Photo/Dolores Ochoa)