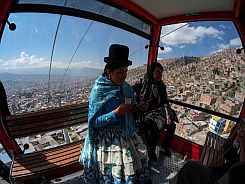 Women ride in a cable car during a media preview of an urban ropeway between El Alto and La Paz April 8, 2014. Austria’s Doppelmayr Garaventa Group held a media preview on Tuesday for the first of three urban ropeways in the Bolivian capital of La Paz. The first ropeway links the cities of La Paz and El Alto. The three ropeways will have an overall length of almost 11 km (6.835 miles) and a total of 11 stations, forming the world’s largest network of urban ropeways and easing the traffic on congested roads, according to Doppelmayr. Picture taken with fisheye lens. REUTERS/David Mercado (BOLIVIA – Tags: TRANSPORT SOCIETY CITYSCAPE)