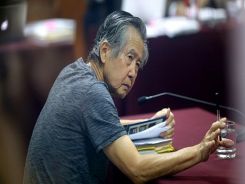 Jailed former Peruvian President Alberto Fujimori, photographed through a glass window, attends his trial at a police base on the outskirts of Lima, Peru, Wednesday, April 23, 2014. Fujimori, who is already serving 25 years following previous convictions, is now being tried for allegedly diverting government funds to finance newspapers that backed his successful run for a third term. (AP Photo/Martin Mejia)