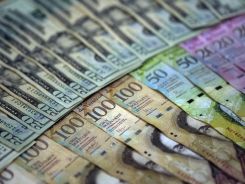 View of local currency and US dollar banknotes, in Caracas on March 24, 2014. The Venezuelan government postponed another week the entry into force of the new exchange market announced more than a month ago to control the “black dollar”, in a context of inflation and shortages, leading causes of the protests against President Nicolas Maduro which have so far caused 31 deaths. AFP PHOTO/JUAN BARRETO