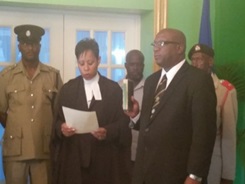 Team Unity supporters outside the compound of Government House cheered after the swearing in of both Dr. Harris and Mr. Byron. The Governor General congratulated the newly elected government towards the close of the swearing-in ceremony. The newly elected Prime Minister addressed the gathering in a brief address where he thanked the voters and stressed that the premises of a government of national unity is restoring democracy in St. Kitts and Nevis and providing prosperity and fairness to all.