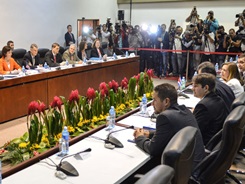 US Assistant Secretary of State for Western Hemisphere Affairs, Roberta S. Jacobson (in orange suit a left) and the Director of the North America Department of Cuba’s Foreign Ministry, Josefina Vidal (in white al right), head their respective delegations during the second day of closed-door talks between Cuba and the United State, at the Convention Palace in Havana, on January 22, 2015. The United States and Cuba opened two days of historic talks in Havana on Wednesday to end decades of Cold War-era animosity and reestablish diplomatic relations. The meetings in Havana follow the historic decision by US President Barack Obama and Cuban leader Raul Castro in December to seek normal diplomatic relations. AFP PHOTO / Adalberto ROQUE