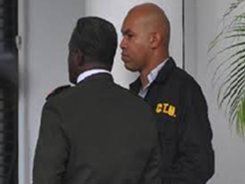 Suriname president’s son sentenced to 16 years by US court

Dino Bouterse, the son of Suriname’s president, Desi Bouterse, who assisted in the formation of that country’s counter-terrorism unit, was sentenced on Tuesday in federal court in New York City to 195 months in prison for attempting to provide material support and resources to Hezbollah, a designated terrorist organization, along with narcotics trafficking and firearms offences.

Bouterse, 42, who was arrested in Panama on August 29, 2013, and arrived in the United States on August 30, 2013, pleaded guilty before US District Judge Shira Scheindlin, who also imposed sentence.

“Dino Bouterse was supposed to oppose terrorism,” said US Attorney Preet Bharara. “Instead, Bouterse betrayed his official position and tried to support and aid Hezbollah, including his agreement to assist Hezbollah in acquiring weapons, and conspiring to import cocaine to the US. Today he has been sentenced to a lengthy prison term for those odious crimes.”

According to the indictment, other documents filed in federal court and statements made at Tuesday’s sentencing, in 2013, Bouterse used his position within the government of Suriname to assist individuals he believed were members of Hezbollah, who informed Bouterse that they intended to conduct terrorist attacks against American interests.

In exchange for a multimillion-dollar payment, Bouterse agreed to allow large numbers of purported Hezbollah operatives to use Suriname as a permanent base for, among other things, attacks on American targets.

In June 2013, Bouterse and a co-defendant, Edmund Quincy Muntslag, met in Bouterse’s office in Suriname with confidential sources (the CSs) working with the Drug Enforcement Administration (DEA) to discuss importing cocaine into the United States using commercial airline flights. During the meeting, Bouterse showed the CSs a rocket launcher and a kilogram of cocaine.

Approximately one month later, Bouterse and Muntslag worked to provide transportation and security for cocaine being sent through Suriname to the United States. As a test run, Bouterse and Muntslag sent 10 kilograms of cocaine on a commercial flight departing from Suriname. Bouterse personally verified the arrangements for the 10-kilogram cocaine shipment in a text message. The cocaine was intercepted by law enforcement officials after it departed Suriname.

In July 2013, Bouterse met with one of the CSs to discuss opening Suriname to the CSs’ purported Hezbollah associates.

Later that month, Bouterse met in Europe with one of the CSs and with two other men who purported to be associated with Hezbollah. During this meeting, Bouterse discussed initially hosting 30 to 60 Hezbollah members in Suriname for training and operations. He also indicated that he wanted a Hezbollah cell in Suriname to act, in part, as a personal armed force.

Bouterse confirmed his understanding that the purported Hezbollah operatives would operate in South America against American targets, and he agreed to supply Surinamese passports to the operatives and to assist with their applications for visas to travel from South America into the United States.

In addition, in response to a request for surface-to-air missiles and rocket-propelled grenades, Bouterse stated that he would need “two months” and that he would provide a list of what he could supply.

Following this meeting, Bouterse was arrested by Panamanian law enforcement and transferred to the custody of the DEA.

On August 29, 2014, Bouterse pleaded guilty to attempting to provide material support to Hezbollah, a foreign terrorist organization; conspiring to import five kilograms or more of cocaine into the United States; and using and carrying, or aiding and abetting the use and carrying of, a firearm during and in relation to a drug-trafficking crime. In addition to his prison term, Bouterse was ordered to pay a $300 special assessment fee.