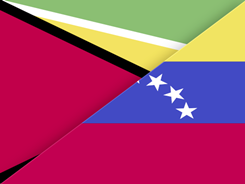 US stands firm with Guyana

The United States of America said it stands ready to support the Government of Guyana on the position it has taken against the Venezuelan Government, which, in a recent move of provocation has warned the oil exploration company Exxon Mobil against drilling in Guyana’s waters.

Charge’ d Affaires of the United States Embassy here in Guyana Bryan Hunt told Guyana Times on Monday that the US has taken a negative stance of any attempt by any government that would seek to disrupt the work of Exxon Mobil.

Exxon Mobil is a US-based oil exploration company which was recently awarded concession by Guyana to undertake exploratory work in the Stabroek block. The Venezuelan Government, late Saturday evening however, objected to the dispatch of a rig to dig an exploratory oil well in a concession granted by Guyana to the oil company. The Foreign Affairs Ministry here immediately responded to Caracas, asking the oil rich country to desist from taking any actions that would stymie this country’s development.

“The Ministry of Foreign Affairs has requested that the Government of the Bolivarian Republic of Venezuela desist from taking any actions that could only result in the stymieing of the development of Guyana and its people and that would be in contravention of international law,” the Foreign Affairs Ministry said, in a release.

Venezuela’s contention is that the area at which the oil company will be drilling is within its territorial border. But opposition leader David Granger remarked that Guyana is well within its right and pointed out that the territorial controversy between the two countries was resolved more than 115 years ago by an international tribunal.

Alluding to this emerging issue involving ExxonMobil, he said Guyana should be allowed to explore its economical potential as a small developing state.

Meanwhile, the US official told Guyana Times that his Government, recognising fully Guyana’s authority in issuing the concession to the private company, was heartened by the fact that Georgetown had clearly indicated to Venezuela that it has the sovereign right to award contracts for developments within its territory. He said the US has also supported Exxon Mobil’s ability to move forward with the development of its concession here.
“It is our hope that the government and Exxon Mobil continue to collaborate and continue to have a very successful partnership in moving forward in authority to move forward toward its natural resources”.

Military intervention
Asked whether the United States is prepared to intervene militarily should the Venezuelan Government maintain its stance, the US official said he would not want to speculate, or tread on such grounds, but maintained that the US will stand with Guyana’s government on this.

The United States had recently suggested that Caribbean countries seek to loosen their ties with Venezuela, which currently provides them with oil through the Petrocaribe deal.

US officials had said Caribbean governments should leverage existing market trends and embrace gas as a near-term bridge fuel to promote energy security and facilitate investment in regional interconnection infrastructure.

Asked if this call has been justified giving the recent move by the Venezuelan Government, the US Charge’d Affaires said his country’s view on Venezuela is a simple one that is derived from the numerous actions that have been taken by the Government.

“We are very concerned by the deteriorating state of human rights and democracy in Venezuela and what appears to be an attempt by the Venezuelan Government to deny its own citizens the basic economic social and political rights”.

He said he believes that it is appropriate for all countries of the Organisation of American States to call upon the Government of Venezuela to live up to the democratic and human rights that are laid out in the various documents.

He said he hoped the Caribbean countries would join with the many others to make their voices heard to the Venezuelan Government that it has an international responsibility to uphold the treaties of the OAS which deal with the social economical and political rights of all people in the Americas.

The US backing on the issue adds to a position already taken by the main political opposition A Partnership for National Unity, which said it stands firmly behind the ruling administration, against the latest objection by Venezuela. Granger had suggested that the country’s action was consistent with past occurrences as he alluded to the attempted ‘Essequibo Annexation’.

“The Venezuelan Government, under President Raúl Leoni Otero (1964-1969), placed an advertisement in the Times newspaper of London on June 15, 1968 to the effect that Essequibo belonged to Venezuela and that it would not recognise economic concessions granted there by the Guyana Government,” he explained.

As such, APNU is calling on Venezuela to comply with Article 33 of the Charter of the United Nations for the Pacific Settlement of Disputes and to desist from resorting to force in the Guyana-Venezuela matter.

The Ministry of Foreign Affairs wishes to inform that consequent upon a communication being sent from the Venezuelan Foreign Minister to the Country Manager of Esso Exploration and Production Guyana Limited objecting to the despatch of a rig to proceed with the exploration of an oil well in the concession granted by the Government of Guyana, the Government of Guyana has despatched a Note Verbale to the Venezuelan Foreign Ministry.

The Ministry of Foreign Affairs has requested that the Government of the Bolivarian Republic of Venezuela desist from taking any actions that could only result in the stymying of the development of Guyana and its people and that would be in contravention of international law.
The Ministry has also informed CARICOM, UNASUR, the OAS, the Commonwealth as well as the United Nations Secretary General about this recent action by Venezuela.