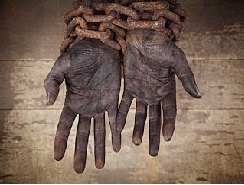 Reparations must be based on diplomacy, says Barbados PM

Barbados and other Caribbean Community (CARICOM) states will go the route of diplomacy and not protest on the issue of reparations for native genocide and slavery, Barbados Prime Minister Freundel Stuart told members of the media during a press conference on the final day of the 26th inter-sessional conference of CARICOM heads of government in Nassau, Bahamas.

Stuart stated that the issue was not going “to be an overnight initiative”, but one in which the entire region was “irrevocably committed”.

Saying that regional leaders would do nothing to undermine the current relations between former slave trading nations by embarking on a confrontational approach, Stuart gave the assurance that leaders would not turn their backs on the history and the legacy which has been bequeathed as a result of slavery and native genocide.

“We contemplate, therefore, as a first measure, having a discussion with designated countries – former slave trading countries – to see what areas of agreement exist and whether there can be an amicable and civilised resolution to our differences,” he explained.

The prime minister made it clear that regional governments were not trying to get sizeable monetary compensation from the former slave trading nations through court action but to remind them of the impact of slavery on persons in the Caribbean.

“There is a legacy with which we are dealing, and what we are trying to sensitise former slave trading nations to is the existence of that legacy and to the connection between that legacy and their actions in the 17th, 18th and part of the 19th century,” he said.

Stuart, who chairs the prime ministerial sub-committee on reparations, stressed that achievements would most likely not be realised in the short-term.

“We have to take the long view on this issue recognising the legacy that we are fighting did not take shape overnight and, therefore, it is not going to be dismantled overnight, but we have to start somewhere starting with the pursuit of reparatory justice,” he said.

He noted that Haiti was a very good example of the social, economic and political deficit in the region that was a direct result of slavery and it was necessary to try and see what developmental initiatives could be initiated to redress some of the imbalances.

Stuart added that, with the United Nations designating this decade as one for people of African descent, it was time “to take full advantage of this and ensure that the agenda of the decade reflects some of our more fundamental concerns”.