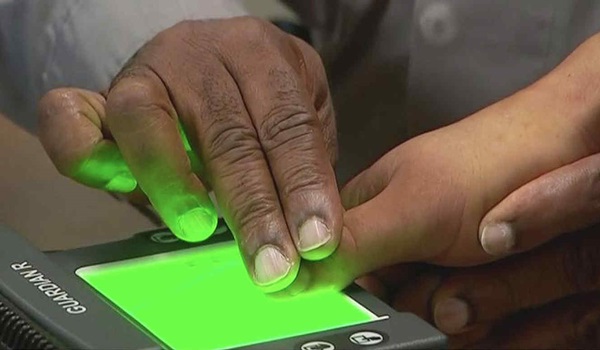 The Barbados Labour Party (BLP) plans to take Government to court regarding its plans to implement fingerprinting at ports of entry, despite the Freundel Stuart administration’s rescheduling of its implementation date.

Last Friday, Government announced that it had pulled the Immigration (Biometrics) Regulations which it had planned to implement on April 1, with the explanation that the Immigration Department needed time to review legal and other issues raised by objectors, and raise public awareness.

But BLP Member of Parliament for St James North, Edmund Hinkson, told a party rally at Baxter’s and Westbury roads last night that deferment of the regulations was not enough.

“They say they going to consult you, but we ain’t minding that,” Hinkson said. “We still going to court to get the regulations declared unconstitutional, because you can’t prevent Barbadians from leaving Barbados or from coming back into Barbados when they have a right under the Constitution to do so.”

Following Government’s announced plan to implement the regulations at all ports, there were a number of objections, mostly from citizens, who questioned the correctness of Bajans being subjected to fingerprinting and other biometric scans when entering and leaving the island.

“You imagine that you will get fingerprint when you have a right under the constitution to enter Barbados, as a Barbadian, the country of your birth where your navel-string bury,” Hinkson told the party faithful, while adding that the recent withdrawal should be seen as a “partial victory”.

He pointed out that while fingerprinting records are taken of people visiting other countries, that request is not made of persons entering or leaving their homeland, including Americans, “and they are under the greatest security threat in the world”.

Hinkson said the Immigration Department’s promise to give Barbadians more information on the planned measure, “is what they should have done a long time before. Consult the people of Barbados and not treat you like little children.”

Prior to Government’s withdrawal of the measure, Opposition Leader, Mia Mottley, had announced that she and Hinkson were part of a BLP team planning to take the authorities to court to question its constitutionality.