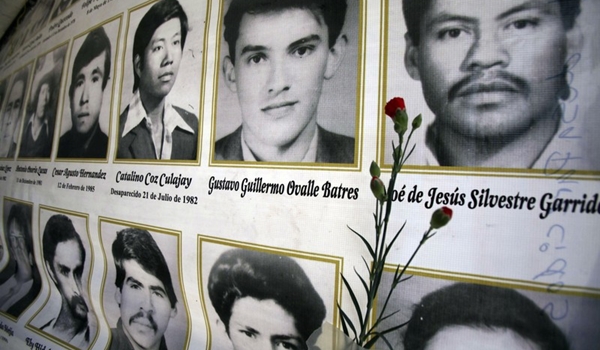 Last year was a busy one for Guatemala’s criminal justice system.

January 2016 saw the arrests of 18 former military officers for their alleged part in the country’s dirty war of the 1980s. In February last year, two ex-soldiers were convicted in an unprecedented wartime sexual slavery case from the same era.

Such legal proceedings represent further openings in the judicial system following the 2013 trial and conviction of former head of state General Efraín Ríos Montt for genocide and crimes against humanity. Although the Guatemalan Constitutional Court very quickly annulled the trial (finally restarted in March after fitful stops and starts, but currently stalled again), a global precedent has been set for holding national leaders accountable in the country where their crimes took place.

And in November, a Guatemalan judge allowed a separate case against Ríos Montt to proceed. The case relates to the 1982 massacre in the village of Dos Erres.

Ríos Montt was president from 1982 to 1983, a period marked by intense state violence against the indigenous Mayan peoples. The violence included the destruction of entire villages, resulting in mass displacement.

Mayans were repeatedly targeted during the period of repression that lasted from 1954 – when the US engineered a military coup – to 1996. More than 200,000 people were killed in Guatemala during that period, 83 percent of whom were Mayans.

The crimes committed by the Guatemalan state were carried out with foreign – particularly US – assistance. One key party to these crimes has so far eluded any mention inside the courts: Israel.

From the 1980s to today, Israel’s extensive military role in Guatemala remains an open secret that is well-documented but receives scant criticism.

Discussing the military coup which installed him as president in 1982, Ríos Montt told an ABC News reporter that his regime takeover went so smoothly “because many of our soldiers were trained by Israelis.” In Israel, the press reported that 300 Israeli advisers were on the ground training Ríos Montt’s soldiers.

One Israeli adviser in Guatemala at the time, Lieutenant Colonel Amatzia Shuali, said: “I don’t care what the Gentiles do with the arms. The main thing is that the Jews profit,” as recounted in Dangerous Liaison by Andrew and Leslie Cockburn.

Some years earlier, when Congressional restrictions under the Carter administration limited US military aid to Guatemala due to human rights violations, Israeli economic and military technology leaders saw a golden opportunity to enter the market.

The CBS Evening News with Dan Rather program attempted to explain the source of Israel’s global expertise by noting in 1983 that the advanced weaponry and methods Israel peddled in Guatemala had been successfully “tried and tested on the West Bank and Gaza, designed simply to beat the guerrilla.”

Israel’s selling points for its weapons relied not only on their use in the occupied West Bank and Gaza but also in the wider region. Journalist George Black reported that Guatemalan military circles admired the Israeli army’s performance during the 1982 invasion of Lebanon. Their overseas admiration was so unabashed that rightists in Guatemala “spoke openly of the ‘Palestinianization’ of the nation’s rebellious Mayan Indians,” according to Black.

Military cooperation between Israel and Guatemala has been traced back to the 1960s. By the time of Ríos Montt’s rule, Israel had become Guatemala’s main provider of weapons, military training, surveillance technology and other vital assistance in the state’s war on urban leftists and rural indigenous Mayans.

In turn, many Guatemalans suffered the results of this special relationship and have connected Israel to their national tragedy.

One of the most haunting massacres committed during this period was the destruction of the El Petén district village named Dos Erres. Ríos Montt’s Israeli-trained soldiers burned Dos Erres to the ground. First, however, its inhabitants were shot. Those who survived the initial attack on the village had their skulls smashed with sledgehammers. The bodies of the dead were stuffed down the village well.

During a court-ordered exhumation in the village, investigators working for the 1999 UN Truth Commission cited the following in their forensics report: “All the ballistic evidence recovered corresponded to bullet fragments from firearms and pods of Galil rifles, made in Israel.”

Then US President Ronald Reagan – whose administration would later be implicated in the “Iran-Contra” scandal for running guns to Iran through Israel, in part to fund a paramilitary force aiming to topple Nicaragua’s Marxist government – visited Ríos Montt just days before the massacre.

Reagan praised Ríos Montt as “a man of great personal integrity” who “wants to improve the quality of life for all Guatemalans and to promote social justice.” Reagan also assured the Guatemalan president that “the United States is committed to support his efforts to restore democracy and to address the root causes of this violent insurgency.” At one point in their conversation, Reagan is reported to have embraced Ríos Montt and told the Guatemalan president he was getting “a bum rap” on human rights.

In November 2016, however, judge Claudette Dominguez accepted the Guatemalan attorney general’s request to prosecute Ríos Montt as intellectual author of the Dos Erres massacre, pressing him with charges of aggravated homicide, crimes against humanity and genocide.

Among the 18 arrested this year was Benedicto Lucas García, former army chief of staff under his brother Romeo Lucas García’s military presidency. Benedicto, who was seen by some of his soldiers as an innovator of torture techniques for use on children, described “the Israeli soldier [as] a model and an example to us.”

In 1981, Benedicto headed the inauguration ceremony of an Israeli-designed and financed electronics school in Guatemala. Its purpose was to train the Guatemalan military on using so-called counterinsurgency technologies. Benedicto lauded the school’s establishment as a “positive step” in advancing the Guatemalan regime to world-class military efficiency “thanks to [Israel’s] advice and transfer of electronic technology.”

In its inaugural year alone, the school enabled the regime’s secret police, known as the G-2, to raid some 30 safe houses of the Revolutionary Organization of People in Arms (ORPA).

The G-2 coordinated the assassination, “disappearance” and torture of opponents to the Guatemalan government.

While Guatemalan governments frequently changed hands – through both coups and elections – during the 1980s, Israel remained Guatemala’s main source of weapons and military advice.

Belligerence at the border
The Israeli military-security complex casts a long, intercontinental shadow over Guatemalans who are still fleeing the consequences of the dirty war.

In some areas along the US-Mexico border, such as in Texas, the numbers of migrants hailing today from Central America (but only from the countries combusted by US intervention – Guatemala, El Salvador, Honduras) – has begun to outpace the number coming from Mexico.

According to information provided to this author by the Pima County Medical Examiner’s office in Arizona, many Guatemalans who have perished while crossing these desert borderlands originated from among the indigenous Mayan areas hit hardest by the 1980s genocide: El Quiché, Huehuetenango, Chimaltenango.

Southern Arizona has also seen a spike in undocumented Guatemalan migration. US firms and institutions have been collaborating with Israeli security companies to up-armor Southern Arizona’s border zone.

The Israeli weapons firm Elbit won a major government contract to provide 52 surveillance towers in Southern Arizona’s desert borderlands, beginning with the pilot program of seven towers currently placed among the hills and valleys surrounding Nogales, a border town split by the wall.

More towers are slated to surround the Tohono O’odham Nation, the second largest Native American reservation in the US. Already the number of federal forces occupying permanent positions on Tohono O’odham lands is the largest in US history.

Alan Bersin, a senior figure in the US Department of Homeland Security, described Guatemala’s border with Chiapas, Mexico, as “now our southern border” in 2012. That “southern border” was heavily militarized during Barack Obama’s eight years as US president.

We can safely expect that militarization to continue during Donald Trump’s presidency. Trump’s anti-migrant rhetoric during the presidential election campaign suggests it is likely to be intensified.

During the dirty war, tens of thousands of Guatemalans fled over this border into Southern Mexico. Today, Israel assists the Mexican authorities in Chiapas with “counterinsurgency” activities largely targeting the indigenous Maya community.

Though media reporting on Guatemala’s connection with Israel has dissipated, Israel’s enterprising efforts in the country have never diminished. Today, Israel’s presence in Guatemala is especially pronounced in the private security industry which proliferated in the years following the so-called Guatemalan peace process of the mid-1990s.

Ohad Steinhart, an Israeli, relocated to Guatemala at this opportune moment, originally working as a weapons instructor. Roughly two years after his 1994 move to Guatemala, he founded his own security firm, Decision Ejecutiva.

Founded by ex-Israeli special forces officers, the Golan Group has also trained Department of Homeland Security immigration agents along the US-Mexico border. The Golan Group has employed thousands of agents in Guatemala, some of whom have been involved in repressing environmental and land rights protests against mining operations by Canadian firms. The company was named in a 2014 lawsuit by six Guatemalan farmers and a student who were all shot at close range by security agents during a protest the previous year.

Guatemala’s use of Israeli military trainers and advisers, just as in the 1980s, continues. Israeli advisers have, in recent years, been assisting the current “remilitarization” of Guatemala. Journalist Dawn Paley has reported that Israeli military trainers have shown up once again at an active military base in Coban, which is the site of mass graves from the 1980s. The remains of several hundred people have so far been uncovered there.

The mass graves at Coban serve as the legal basis for the January arrests of 14 former military officers. This past June a Guatemalan judge ruled that the evidence is sufficient for eight of those arrested to stand trial. Future arrests and trials are likely to follow.

Scholars Milton H. Jamail and Margo Gutierrez documented the Israeli arms trade in Central America, notably in Guatemala, in their 1986 book It’s No Secret: Israel’s Military Involvement in Latin America. They worded the title that way because the bulk of the information in the book came from mainstream media sources.

For now, Israel’s well-documented role in Guatemala’s dirty wars passes largely without comment. But Guatemalans know better than most that the long road to accountability begins with acknowledgment.

Yet it is unclear how long it will be before we hear of Israeli officials being called to Guatemala to be tried for the shadowy part they played in the country’s darkest hours.