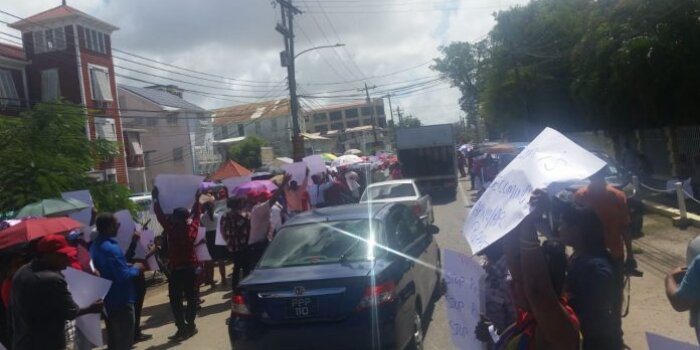 Protest in front of GECOM

Protesters are currently in front of the Guyana Elections Commission’s Kingston Headquarters calling for the Commission to swiftly announce its preparedness for the hosting of General and Regional Elections following the successful passage of a motion of no confidence against the APNU-AFC Government.

With police barriers set up at all corners of Kingston to protect the headquarters of GECOM, the PPP supporters believe that the election body is delaying the holding of elections.

Jagdeo told the media that the aim of the protest is to end a small signal to GECOM and the Government that the PPP will not tolerate any disrespect to the constitution.

In his address to supporters during the protest at Red House, the Opposition Leader said that the PPP will continue to keep the pressure on the Government until elections are held by March 19.

“If elections are not held by March 19, from that date onwards, this Government become illegal, unconstitutional. They can’t sign contracts.

“We’re making it clear that the situation will change in Guyana…we’re not threatening violence. We’re gonna use constitutional measures but trust me, we will ratchet up the pressure on this Government,” Jagdeo told the huge crowd who responded with applause.

According to Jagdeo, the PPP continues to brief the international community about GECOM’s role in the matter and does not rule out more court action against the Government.

“…pressure from civil society, we’re hoping all freedom loving people in Guyana and our Commissioners [PPP] themselves have to fight to ensure that GECOM delivers on its mandate. There is a possibility even of going to the court.”

The Opposition Leader urged his supporters to remain strong and steadfast.

“Let’s keep the pressure up because GECOM has a mandate, it’s a constitutional body and it has to respect our Constitution. The Constitution of Guyana is the supreme law of our country. It now kicks into effect. It’s not what the PPP wants or the APNU wants, what the Government wants.”

Following the December 21 No Confidence motion, elections are due by March 19, unless the National Assembly agrees on an extension. Chief Justice Roxane George-Wiltshire last Thursday declared that the motion was validly and lawfully carried.

The Government has already appealed her ruling and according to Jagdeo, the coalition Government has demonstrated bad faith since the passage of the motion.

He said to supporters, “We have to take back our country from this corrupt, incompetent cabal who have betrayed all the people of the country including their own supporters.”

While he is of the opinion that the voters’ list is clean and valid, with a life until the 30th of April, Chief Elections Officer, (CEO) of the Guyana Elections Commission (GECOM), Keith Lowenfield says that it is ultimately up to the Commission to decide whether the list is ready for General and Regional Elections.

Lowenfield spoke to the press on GECOM’s preparedness for general elections following a meeting of Commissioners held at the Secretariat in Kingston yesterday.

The meeting was scheduled to discuss the possible timeline for elections.

The move for early elections comes on the heels of a court decision, which validated the no-confidence motion passed against the Government, in the National Assembly on December 21, 2018.

The ruling set in motion the constitutional provision for an election within the period of 90 days.

However, based on the discussion put forward, Lowenfield noted that it is likely that the elections date will be extended beyond the 90-day period, which is set to expire on March 19.

In the interim, Lowenfield said “A lot of factors are up for consideration, for instance house-to-house registration.

Are we going have 400 additional sub-offices or are we going to have 200 locations for house-to-house registration?”

According to Lowenfield, based on the timelines being put forward by GECOM’s Secretariat, it will be unlikely for elections to be held before July 2019.

“The Secretariat’s work is guided or directed by the Commission, the secretariat cannot move forward with the conduct of an elections unless the commission decides that we will have a claims and objections period, for example, for seven, nine, or ten days.”

The CEO told the media that yesterday’s meeting commissioners was mainly for work-plans of the Operations Sub-Committee to be discussed.

He disclosed that the Operations Sub-Committee is expected to meet again this morning, ahead of another discussion scheduled for 2:00 pm today.

“In my view, there is no other consideration that one could arrive at, but that GECOM itself, at the level of the secretariat, is complicit in this problem. Either they have to be taking instructions out of fear or complicity, deliberately so, or they in themselves do not want to see these activities unfold as constitutionally mandated,” Benn said, adding that he believes that some of the activities could be eliminated to achieve the March 19 deadline.

He stressed too that there is need for less training, especially since the staff had undergone training for the Local Government Elections held on November 12 last.

PNC-nominated Commissioner, Charles Corbin, on the other hand, said the Commission must take guidance from the Secretariat. He said the secretariat has submitted its work plan.

“There is a reason why we would need to put all the information we have together, because clearly there will be questions based on our discussions today (yesterday).”

He noted too that if one should reflect on a few years when the Elections Commission found itself facing a similar scenario — the timeline given then was about six months.