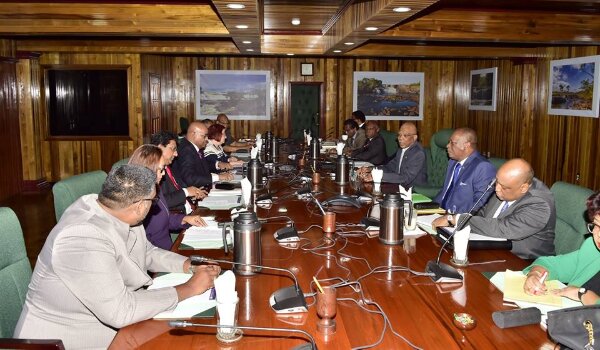 A key meeting of the Guyana Elections Commission (GECOM) ended abruptly last evening with no consensus on a date for General and Regional Elections.

It will raise questions exactly what the commissioners will tell two parliamentary plenipotentiaries – the two Chief Whips- this afternoon about the readiness of GECOM to hold early elections.

The issue of early elections came about after the December 21st no-confidence vote which was carried after government parliamentarian, Charrandass Persaud, said yes, toppling the one-seat majority Coalition administration that had only been in power for just over three years.

Under the Constitution, the no-confidence vote meant that elections have to be called within 90 days unless the Government and Opposition can agree for the life of Parliament to be extended.

Persaud had left Guyana and is being investigated in a “matter of national security” and allegations of possible bribe taking.

Government has since challenged the vote in court, insisting that Persaud, who was expelled by his party, the Alliance For Change, had two passports – including one for Canada, and under the laws should not have been a parliamentarian.

The High Court is expected to rule next week on the validity of the vote.

In the meantime, the Government and the Opposition have agreed to both send the Chief Whips to GECOM to find out how ready the entity is for elections in 90 days.

Yesterday, Chief Elections Officer, Keith Lowenfield, was scheduled to brief the six commissioners and Chairman, Justice (Ret’d) James Patterson, on the situation, outlining his plan for training, need for money and resources, among other things.

Speaking about the meeting shortly after 8 p.m., Commissioner Robeson Benn, one of three commissioners representing the People’s Progressive Party (PPP), which is in Opposition, disclosed that there is no consensus and that his party will now have decide on the way forward.

He said that the morning session ended with some sort of “emerging consensus” which could have seen elections being held by April 29th.

According to Benn, based on the vote, the Constitutional drop dead date to hold elections was by the latest, March 19th or 20th.

Lowenfield was advised that in terms of money for the election, they could use the funds approved by the National Assembly for house-to-house registration..

With regards to training, there were three elections, beginning 2015 using the same voters’ list.

According to Benn, it was suggested that if there were concerns of dead persons and persons who attained voting age, these could be easily fixed, including using information from the General Registrar’s Office and police stations where deaths are recorded.

“We disagreed that there was a need for a house-to-house registration.”

According to Benn, while the meeting broke for lunch with an “emerging consensus”, this all changed after the meeting resumed at 16:30hrs.

“They (Government commissioners) insisted that there is need for the list of voters to be sanitized. That many persons would be disenfranchised. The point is GECOM has now added a life outside that 90-days period.”

According to Benn, the Government side also argued that it will take time to order supplies and other items for the election, using the established tendering process.

“We told them that they can use an expedited process of procurement of supplies; that they had supplies too from the recent elections, but it seems there were other intentions.”

According to Benn, based on the Constitution and the little that was garnered from the briefing of Lowenfield, the PPP as the Opposition strongly believe that elections can be held in as little as 50 days.

The commissioner also disclosed that a meeting will be held with the two Chief Whips, Amna Ally and Gail Teixeira of the Government and Opposition sides, respectively, at 1pm today.

For now, there is no date for what would be one of the most crucial elections in Guyana’s history. In a year, the country will be pumping its first oil.

PPP lost in 2015 because of early elections due to the proroguing of Parliament.

It would have been the first time in 23 years that the PPP had lost control of Government.

GECOM seems to be in “stalling mode” – PPP Commissioners

It has been 34 days now since the historic no-confidence motion was passed in the National Assembly activating Article 106 of the Constitution which mandates that fresh elections be called within a 90-day period, but the President is still to announce a date for elections and according to People’s Progressive Party (PPP) Commissioners at the Guyana Elections Commission (GECOM), the entity seems to be in stalling mode.

GECOM, which successfully ran the Local Government Elections (LGE) in November 2018 less than three months ago, is being blamed by Government for not being ready, but it is the President of Guyana who has to give a date for elections and not GECOM as being touted.
On Thursday, GECOM’s Commissioners met for the first time to discuss the readiness of the Commission for the March 21, 2019 deadline for mandatory elections as stipulated by the Constitution of Guyana. However, that meeting, which lasted more than five hours did not bear much fruit.

Speaking to the media following the meeting, PPP Commissioners Sase Gunraj, Bibi Shadick and Robeson Benn all expressed their disappointment that GECOM seems to be in a stalling mode.

According to Gunraj, during the morning session of the meeting, there seemed to be consensus that elections could have been held within the constitutionally mandated time; however, during the afternoon session, there were a number of issues raised and consensus went out of the window.

“What we saw was a whole host of issues being raised. There is a valid list that ought to be used for the holding of elections. That list was certified on October 30 (2018) and has a validity for six months. Because the law says so,” Gunraj noted.

He indicated that the Government’s Commissioners seemed to be pushing for a house-to-house registration process to be conducted along with claims and objections. He added that the list was active and there was no need for that list to be refreshed since it was used during the November 12, 2018 LGE and will expire on April 30, 2019.

“This morning (Thursday) a document was presented dated January 23 and offers the holding of elections on or before April 30 and we are now hearing that it is now not possible. How will you now say that is impossible?” he questioned.

He noted that the document was presented by the Chief Elections Officer (CEO) along with several others with no clear timeline indicated.

“I maintain that the documents that have been presented to us earlier by the Secretariat under the hand of the CEO and his officers show clearly that we can hold elections under the constitutionally-mandated period. Unfortunately we are now hearing other considerations being put forward that militate against the holding of elections and again I said earlier and I find that very distasteful,” Gunraj said.

He said when hosting an election, the Commissioners are supposed to be presented with a work plan and they would have requested that at Tuesday’s meeting, but to date have not received any such plan from the CEO. He said that the work plan is populated by tasks and their duration and when juxtaposed with dates a critical path is derived.

He said that all they have seen are poorly thought-out proposals which do not indicate the readiness or not of the Elections Commission for the hosting of the constitutionally-mandated elections.

Meanwhile, Commissioner Shadick said that while consensus has not been arrived at, it is solely because of the Government’s Commissioners coming up with new issues that are minute with the intention of delaying or avoiding the constitutional requirements. She explained that she would have produced a timeline that would allow for the hosting of elections within 50 days. She expounded on that indicating that since the Commission would have trained over 11,000 persons for the LGE, it would train every day as opposed to just weekends as well as doing other tasks simultaneously.

“I am convinced that the CEO in trying to please all his masters is prepared to go back on the submissions he gave us and is a thoroughly confused person and at this point I said that he is not fit for the job. We moved the date to meet with the Whips so that they can get together and call their principals so that the President can call a date for elections and GECOM will have to hold that elections because once an election date is announced then GECOM has to meet that date because that is the constitutional mandate of GECOM,” a seemingly upset Shadick told reporters.

She said that GECOM is failing the people of Guyana and that it needs to get its act together.
Commissioner Benn accused GECOM of not playing its part since the passage of the no confidence resolution. Meanwhile, Government Commissioner Vincent Alexander said that the reason GECOM is not ready is because the voters list needs to be fixed.

The GECOM Commissioners requested that COE Keith Lowenfield provide them with feasible timelines based on the operational and legal timings for the conduct of election. He presented those options for them to deliberate on at Thursday’s meeting.

The meeting between GECOM and the Opposition and Government Chief Whips will take place today. That meeting was delayed after GECOM Chairman, retired Justice James Patterson was on medical leave.