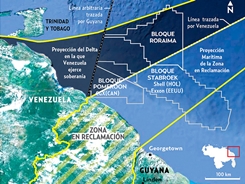 As Minister of Governance Raphael Trotman addressed the National Assembly yesterday, and spoke of the vast wealth that lies in Guyana’s natural resources as well as the fact that the new government will spare no effort to tap into those resources for the benefit of the nation’s development.

Trotman said this as he spoke on a Motion that seeks approval of government’s policy in President David Granger’s address at the convening of the Eleventh Parliament.

Yesterday, Trotman zeroed in on two aspects of Granger’s speech—that which addressed economic growth and that which spoke to a secure Guyana.

Speaking about economic growth, Granger had told the Parliament that his government will establish a sovereign wealth fund for revenues derived from natural resources, oil included.
In addressing the issue of a secure Guyana, the President said “Your Government will do everything within its power to secure our borders.”

He added, “We shall strengthen our friendly relations with our neighbours – the Federative Republic of Brazil; the Bolivarian Republic of Venezuela and the Republic of Suriname. We believe that our four neighbouring Republics together have much to contribute to the security of national borders, to the stability of this continent, to the success of the Union of South American Nations, and to the happiness of our peoples.”

Also, Granger had said, “Your Government will introduce measures to reform the defence and security sectors to ensure that our defence and police forces protect our citizens and our territory.”

Granger had said all of this knowing full well that Venezuela’s President Nicolás Maduro, on May 27, 2015, had issued a decree, extending Venezuela’s claim to Guyana’s territorial waters. A map which was issued, accompanying the decree, shows that the claim includes the area where the US giant oil company, ExxonMobil is currently drilling for oil.

Trotman was one who accompanied President Granger and the Minister of the Presidency, Joseph Harmon, when the government went to visit the area where ExxonMobil is working following the announcement that oil was found.
During his address yesterday, Trotman said that Guyana has a hefty amount of oil, enough to significantly transform the country’s financial fortunes.

Trotman even said that Guyana’s oil potential is as massive as the lucrative West African oil industry and what we have could be described as “elephant wells.” He said that Guyana can be transformed and “Venezuela knows what it has to do, and that is to behave itself.”

The Minister pointed out the fact that Venezuela has developed “what is theirs” without interference and noted that the Spanish-speaking territory already has oil in abundance.

He said that Venezuela was allowed to develop “without questioning from us, and so we too want to enjoy the right to do the same and develop our country without interference.”

Trotman added in this regard, that Guyana will not sit idly by and allow its wealth to be taken away. He said, “While we may not number in the millions, rest assured that our desire to defend that which is ours is not to be underestimated…and so we hope Venezuela will back off.”

The Minister acknowledged the Colombian government’s statement rejecting Venezuela’s decree and thanked that nation for its support.
Foreign Affairs Minister, Carl Greenidge had revealed that Venezuela is threatening to use force to deprive Guyana of its territory, but he declared that the Government of Guyana intends to “utilize all tools available to us to defend our national interest.”

Greenidge said that the decree is quite dangerous and very much illegal by the standards of international law. He said that in light of such, Guyana continues to prepare for eventualities.

Venezuela media recently reported that Maduro was set to address the current conflict with Guyana in the Venezuelan National Assembly today (Friday, June 26) while threatening military action against any perceived “infractions.”

He is quoted as saying ”I will denounce international manoeuvres…to provoke Venezuela, (it) will not be, and I’ll summon the civil union, (the) military to defend our country, our land, and our historical positions.”